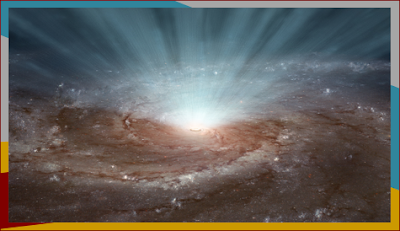 Beyond Stephen Hawking's World Economic Forum speech, one of the most fascinating bits of knowledge that I acquired in 2015 came through Dr. Jedidah Isler, a Yale Astrophysicist. For her award-winning study of supermassive black holes, Dr. Isler was awarded a PhD from Yale in the fall of 2014 - and she is the only African-American female astrophysicist in Yale's 312 year history. She is quite rare.

Dr. Isler may be more rare than the supermassive black holes that she studies and she proved it by delivering an insightful and very necessary message in her latest TED Talk. She opened up about the subject of "liminal space" - better known as the intersection between things. I listened intently because I was learning something new.

Great things happen at intersections. In fact, I would argue that some of the most interesting things of the human experience occur at the intersections, in the liminal space...the space in between. There's freedom in that in-between, freedom to create from the indefiniteness of not-quite-here, not-quite-there, a new self-definition

During liminal periods across all dimensions certainty becomes increasingly uncertain until a new level of certainty is re-established. Likewise what was once known may dissolve into new levels of unknowns until something new emerges. Individuals who love to explore and innovate will find the unknowns intriguing while others who love certainty will become increasingly uncomfortable.

… [liminal space] is when you have left the tried and true, but have not yet been able to replace it with anything else.  It is when you are between your old comfort zone and any possible new answer. If you are not trained in how to hold anxiety, how to live with ambiguity, how to entrust and wait, you will run…anything to flee this terrible cloud of unknowing

Collectively we're in the "liminal space" where uncertainty lives. We're at the intersection of things - between international and trans-national, between established cultures and social network tribes, straddling ideologies and ideas, between injustice and social justice, jobless growth and social entrepreneurship, and many more opposing dimensions. A small sample of "liminal space" dimensions are captured in the diagram. 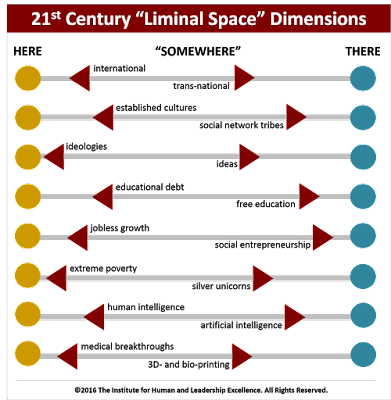 2016 promises to be another year in 21st century "liminal space" - somewhere between here and there - "somewhere".

It can be difficult to find meaningful anchors while the "terrible cloud of unknowing" is upon us. Yet that's exactly what 21st century leaders must do. Leaders must hold on and find new norms while inspiring others to do the same.

-Lillian Gregory, The Institute for Human and Leadership Excellence


What does 21st Century Leadership look like in the "liminal space"?


Individuals who have already adopted 21st century paradigms of leadership will find it easier to hold on in the "liminal space". Holding on is not the same as standing still. There are always new definitions to write, new visions to clarify, new people to meet, new places to explore, new innovations to create, new strategies to develop, and new legacies to build.

While leadership in general is both art and science, 21st century leadership in the "liminal space" is simultaneously uncertain and intriguing. There are few simple formulas left to follow and the best is yet to come - so let's roll up our sleeves and keep moving forward.

Simple Formula for 21st Century Leadership in the "Liminal Space"


These steps along with I-Core Principles help me to navigate the "liminal space".

Do you have a comparable formula or list of guiding principles? If so I'd love to hear all about it. Share your insights by commenting, liking, or sharing.

Posted by Lillian Gregory at 5:02 AM