Social Media Is Not Just "Social", It's Big Business

Social Media is not just "social", it's business - BIG business!  Unless you've been sleeping for the last five years you already know this. The number of technologies, apps, and platforms supporting the engagement, measurement, nurturing, and conversion of contacts into employees, customers, partners, clients, acquaintances, and friends continue to explode. Women and men alike devour content as fast as it gets generated and still want more. The 'free line' has moved. The free line is the boundary between the amount of content products, or services that are given for free versus what customers will pay for. Companies scream louder and louder to get the attention of potential customers - and we've gone deaf. Or have we?

RPV (revenue-per-visit) continues to shatter previous records. Whether you're on Facebook, Twitter, Pinterest, Tumblr, LinkedIn or any other social media platform, you undoubtedly see an increase in the unique types of ad traffic that's designed to get your attention. Reviews of CTR (click-through-rate) or CPC (cost-per-click) provide insight into whether a shift in strategy is warranted. Goldman Sachs recently increased its valuation of Facebook ads due to higher confidence in Facebook's ad ROI (return-on-investment) and mobile strategy.

Social media channels are picking up steam and have their eyes on capturing a greater portion of search dollars. The real race will not be between social media channels, but between marketer's allocation of dollars across search, display, and social. 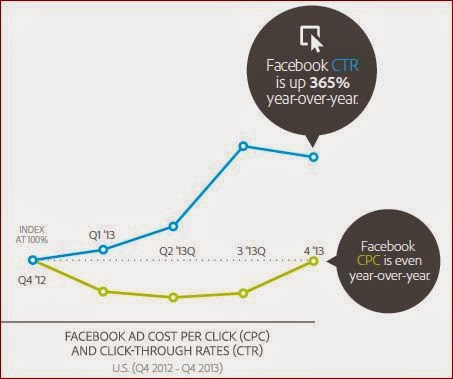 The Interactive Advertising Bureau (IAB) and PricewaterhouseCoopers (PwC) report on internet ad revenue generated from more than 600 leading media and technology companies that are responsible for selling 86% of online ads in the US and is considered to be the most accurate measurement of revenue in this space. According to the IAB press release, internet ad revenues topped $10.7B USD in Q3 2013, a 15% increase over Q3 2012. Growth into 2014 and beyond is expected to accelerate.

Digital has steadily increased its ability to captivate consumers and then capture the marketing dollars that follow. Mobile advertising's breakneck growth is evidence that marketers are recognizing the tremendous power of smaller screens. 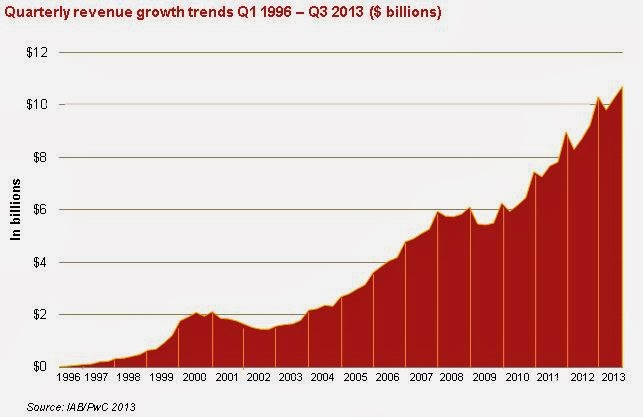 Battle of the Sexes in Social Media

So what do we do with all of these social media outlets? You might imagine that women and men use them differently and you'd be right. Take a look at how the battle of the sexes plays out on social media platforms.  If you're planning on using the platforms for business or for pleasure, it's helpful to know who is listening.

Posted by Lillian Gregory at 12:56 PM No comments:

OK - I'm about to sound like a professor to set the stage for this post. Here we go...

Intellect is of or related to abstract thought, understanding, communication, reasoning, learning, planning, problem solving, and the application of best practices.  That’s how I’ve defined it as part of I-Core Principles.  I’ve often wondered about the tangible value of intellect so I decided to investigate.  The categories that came to mind immediately were intellectual capital and intellectual property.


Our intellect is inherent currency that we develop through years of education, experience, exploration.  It is a way of converting what we know and can do into hard cash or market value through day-to-day transactions (ex. employee) or by unlimited multipliers (ex. entrepreneur).

Question - what is your intellectual capital exchange rate?  Are you trading up or down?


Now that definitions have been level set, the next questions that came to mind are:

Converting intellect to tangible capital in dollars and cents can be tricky.  However, consider this—you’re being paid a wage (hopefully a fair wage) based on the market value of your intellect in the position that you hold.  Is that all that your intellect is worth?  Of course not!
You are also bound by non-disclosure agreements and other legal constraints which make it necessary for you to leave behind any intellectual capital or intellectual property that you develop while employed.  This means that if you have an "Apple" or "Facebook" of an idea which gets adopted while you’re employed, it’s not really yours unless you play your cards right.


I'll continue to explore these concepts and actions that you need to take in a future post.

Posted by Lillian Gregory at 5:42 AM No comments:

The Clock is Ticking - How Are You Spending Your Time?

Time is our way of cataloging our experiences - past, present, and future.  It’s the only thing that equalizes us all.  Time steals our youthfulness, our health, our dreams, and our lives—unless we spend it wisely.  Those who manage their time wisely typically have better health, can live their dreams, and can maximize their contributions to themselves and to those that they love. Have you ever taken an inventory of how you spend your time?  If not, then do it NOW! 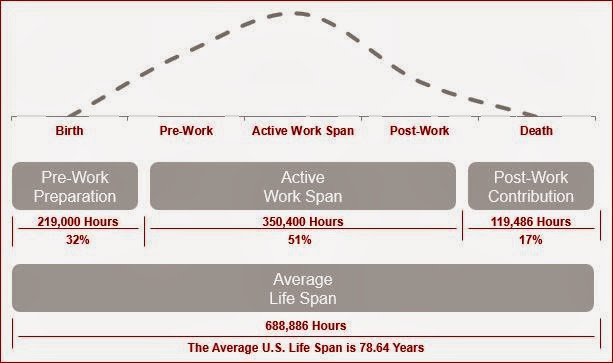 If this time accounting is causing you to get depressed, don’t!  There is no TIME for that!  What you can do is get focused and determine how you can eliminate the time wasters in your life.

Focus on what brings you joy and the greatest possible contribution to yourself, to others that you love, or to things that you really care about.


Build the life that you want right now! The clock is ticking.
Posted by Lillian Gregory at 2:22 PM No comments:

Humans and Technologies Collide When It Comes to Jobs

For years I searched for details that would show the rate of change between technology innovations and the rate of decline or shift in the number of jobs. I had seen information or predictions circulating about IT jobs, but what I was looking for was an in-depth scientific study that would reveal substantive results across industries. At the time I wasn't in a position to do the research myself. Well - I should be careful of what I ask for.

A recent study by Carl Frey and Michael Osborne (September 2013) examined interactions between 702 job types as defined in the U.S. Bureau of Labor Statistics (BLS) 2010 data set, Machine Learning (ML), and Mobile Robotics (MR). Their results are shocking, but realistic.

According to our estimates, about 47 percent of total US employment is at risk.  We further provide evidence that wages and educational attainment exhibit a strong negative relationship with an occupation's probability of computerization. 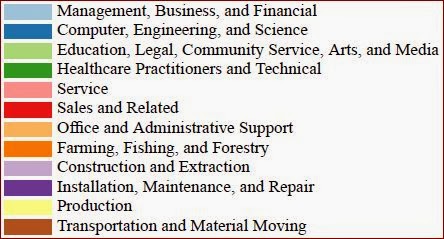 Technology innovations such as industrial robots, friendly robots, data analytics, low cost sensors, vehicle automation, and prefabrication will continue to impact jobs in transportation, manufacturing, farming, construction, administration, sales, and services in the near term.  These are the areas of greatest concern - the 47%. One has to simply catch snips from daily news feeds to confirm the facts. The study cites a plethora of examples showing that the world as we know it has already changed - past tense.

How do we navigate this type of significant shift? By rapidly defining and gaining new skills - skills that aren't in the cross-hairs of ML or MR. The 10,000-Hour Rule (Gladwell, M. (2008); Outliers pp. 35-68) is a challenge but we have time if we start now - right now - to figure out what new skills are required to maintain a sufficient standard of living as the world continues its transformation. Areas requiring a high degree of social and creative intelligence have yet to be conquered by technology. However, it may simply be a matter of time - and human ingenuity - before jobs in these areas also become computerized.

There's a bit of humor in the infographic below, but consider it well. The world has changed.


Everyone Will Become an Entrepreneur [INFOGRAPHIC]
A. Vital, A. Unak; Funders and Founders (September 2013)
Posted by Lillian Gregory at 12:48 PM No comments:

Women in Leadership - Call to Action

Gender equality and pay equity are front and center as human rights issues (as well they
should be!) thanks to The Clintons and many other powerful voices like Bill and Melinda Gates.  In recent weeks, prominent global leaders and concerned citizens all around the world have spoken out about the inequalities that plague women after centuries of challenges.  As a woman in technology, woman in leadership, woman veteran, woman of color, and any other type of "woman" label that can be attached to me, I'm greatly concerned.

I'm concerned for my daughter.  The outlook for her reaching the top leadership ranks in traditional work settings is grim though not impossible.  My daughter has tremendous advantages that many others don't (for one she has me).  However, one or two or 50 making it thru the "eye of the corporate needle" on any level is just not good enough.  I've learned over my lifetime that challenges for others who are like me equal challenges for me.  With that in mind I've recently re-awakened to add my time, my talents, and my treasures to the cause.  The bottom line is that we have families to raise - and a world to run.  The question now is "what's our next move?"

Women perform 66 percent of the world’s work, and produce 50 percent of the food, yet earn only 10 percent of the income and own 1 percent of the property. Whether the issue is improving education in the developing world, or fighting global climate change, or addressing nearly any other challenge we face, empowering women is a critical part of the equation.

Of course there's something seriously wrong with this picture.  I pray that the data was and is wrong.  Not much has changed in the areas cited since 2009 - in very small part because of the global economic crisis.  If the data is right, then we're way beyond simple questions and answers.  The United Nations Millennium Development Goals provide concrete steps for navigating our way out of the craze.  I'm looking forward to a new data set from The Clinton's New Women's Global Initiative in partnership with Google and the World Bank.

In the meantime my focus is on Big Data, the integration of technology and humanity, and people at work.  Big Data is getting bigger - leading to deeper insights and faster decision-making, technology innovations are speeding up - converting expensive challenges into cheaper-better-more accessible solutions, and the world of work may become computerized at alarming rates.  Why is this a concern for women?  Because many of the roles that are currently performed by women are in the crosshairs for computerization.

For those of us who have our heads down taking care of our families, there is a "work" tsunami approaching that may knock us off balance, leaving us wondering what our next move should be.  The alarms are sounding so please pause to hear the follow-up announcement and then decide if it's OK to keep doing what you're doing - or if it's worth your time to acquire additional strategic skills to help you get ahead in the new economy.
Posted by Lillian Gregory at 11:22 AM No comments: